Insurers in Indiana and India report similar rates of non-COVID-related premature deaths. “I’m sure I’m one of many who wonder what kind of diamond mine of data the insurance companies are sitting on,” said educator and statistician Mathew Crawford. 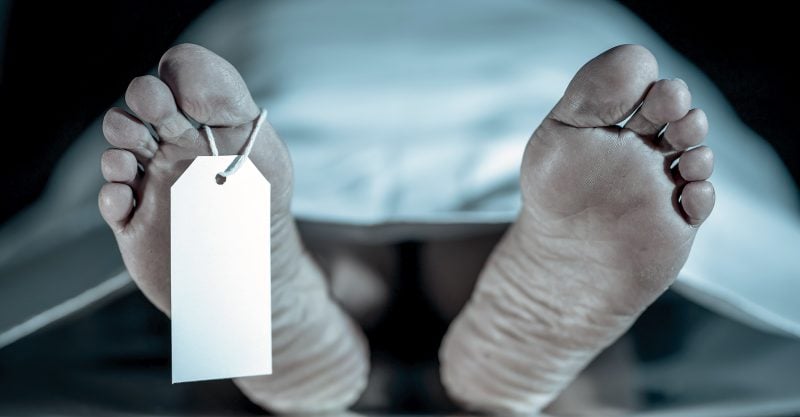 An Indiana insurance executive dropped a bombshell statistic during an end-of-year virtual news conference, reporting a “stunning” 40% increase in the death rate among 18- to 64-year-old adults compared to pre-pandemic levels.

During the same call, OneAmerica’s CEO Scott Davison also described a major uptick in both short- and long-term disability claims.

The insurance executive rated the extraordinarily high death rate as “the highest … we have seen in the history of this business,” adding the trend is “consistent across every player in that business.”

To further underscore the import of his statements, Davison said, “Just to give you an idea of how bad [40%] is, a … one-in-200 catastrophe would be a 10% increase over pre-pandemic. So 40% is just unheard of.”

Contrary to what the public might assume — given the media’s unremitting coverage of COVID-19 — Davison reported most of the death claims listed causes of death other than COVID.

Commenting on the news, Steve Kirsch, executive director of the Vaccine Safety Research Foundation, wrote, “It would take something REALLY BIG to have an effect this big.”

Moreover, Kirsch said, the culprit would have to be something first introduced in 2021 — “something new … that a huge number of people would be exposed to” — such as COVID shots.

Around the country, hospitals are reporting increased admissions for serious non-COVID-related illnesses that just happen to match up to the types of adverse events reported to the Vaccine Adverse Event Reporting System (VAERS) following COVID vaccination.

In fact, at a different Indiana news conference in December, the state’s chief medical officer reported Indiana is experiencing its highest hospitalization rate in five years.

While claiming not to have a breakdown of causes, an Indiana hospital association official noted that the majority of intensive care patients are in the hospital for illnesses and conditions having nothing to do with COVID.

In a September study described as “narrative-shattering,” Harvard, Tufts and Veterans Affairs researchers reported that approximately half of hospitalized patients “showing up on COVID-data dashboards in 2021” had likely been admitted “for another reason entirely.”

In Ventura County, California, which is witnessing a startling spike in non-COVID-related hospitalizations, nurse whistleblowers argue the vaccines should be one of the first explanations considered. Why else, they ask, would otherwise healthy adults be showing up in droves with brain bleeds, heart attacks, autoimmune issues and lung abnormalities?

Autopsies of individuals who died following COVID vaccination reveal shocking pathological alterations most frequently affecting the heart and lungs but also the brain and other organs.

A profitable industry that intends to remain profitable

By revenue, the U.S. has the largest insurance industry in the world, valued in 2020 at $1.28 trillion. Financial analysts deem life insurance — which represents 49% of total premiums paid — to be “one of the most profitable industries in the world.”

More than half (52%) of American adults have life insurance, including group coverage of the type underwritten by OneAmerica. The face value of life insurance policy purchases in the U.S. is $3.29 trillion.

One of the key determinants of life insurance profitability is the accurate assessment of mortality risk by actuaries, and notably, proper accounting of premature death risks.

Reports for 2020 indicate life insurers took an unexpected hit from claims associated with “COVID-19” — with an $18 billion drop in “net gains from operations” in 2020 as compared to 2019.

While no one, as of yet, is commenting on 2021 or discussing whether the life insurance industry may have underestimated the lethality of COVID vaccines, OneAmerica’s Davison did go so far as to admit that payouts related to the unprecedented 40% increase in working-age deaths will be in excess of $100 million.

To claw back those outlays, the costs “will be passed on to employers purchasing group life insurance policies, who will have to pay higher premiums,” Davison said.

Far from being willing to contemplate the elephant in the room, the Indiana insurance executive indicated he plans to require all OneAmerica employees to get vaccinated.

Somewhat counterintuitively, the industry’s ability to pass along costs for elevated claims activity by raising premiums now has analysts rosily predicting the insurance industry is “buckled up to accelerate growth in 2022.”

Insurers also anticipate rising demand due to “businesses and consumers becom[ing] more risk-conscious coming out of the COVID-19 pandemic,” and “new levels of awareness” about the importance of disability insurance.

On the consumer side of the fence, the picture is far less rosy — for both the unvaccinated and vaccinated.

For example, New York State Assemblyman Patrick Burke (D-Buffalo) proposed punitive legislation that would permit insurers to deny COVID-related treatment coverage for individuals who choose not to get vaccinated.

Adding insult to injury, there are also reports of insurance companies imposing premium increases on employers in counties with low vaccination rates.

Meanwhile, many of those injured by COVID vaccines report denials of health and disability insurance coverage.

In December 2020, on the cusp of the vaccine rollout, a spokesman for the Health Resources and Services Administration (HRSA) pledged to beef up claims-handling capacity for the government’s Countermeasures Injury Compensation Program (CICP) in anticipation of a “potential influx of COVID-19 claims.”

The “black hole” program, ostensibly available to dispense compensation for COVID vaccine injuries, is notoriously stingy and has a one-year statute of limitations. Thus far, CICP has only compensated one of the thousands of COVID-vaccine-related claims submitted.

For the time being, at least, other U.S. insurers do not appear to be sharing data or observations about increased non-COVID hospitalization and death claims.

But the press in India is openly discussing the same unprecedented trends as Indiana.

The Times of India reported in late October that health insurers are seeing a “huge surge in non-COVID claims.” Again citing the magic number of 40%, the head of interventional cardiology at a Mumbai hospital noted a 40% increase in heart problems — acute coronary syndrome, sudden heart attacks and cardiac arrest — over the previous six to eight months

The cardiologist also observed that “even patients who have been stable for years are coming in with acute heart emergencies.”

That same month, the New Indian Express reported on widespread concern about the growing prevalence of heart attacks in those under age 45. Although these young adults — including a number of celebrities — typically have “no conventional risk factors,” Indian heart doctors are blaming the mysterious rise in heart attacks on “lifestyle choices.”

Around the same time in late December that OneAmerica’s Davison shared his remarks, Fortune India reported on data from the nation’s Insurance Regulatory and Development Authority showing a 41% increase (there’s that number again) in death claims in fiscal year 2021. In comparison, death claims rose by 11% in fiscal year 2020.

Describing the increase in non-COVID-19 deaths, a life insurance executive suggested the industry might end up posting “a 200-300% increase in claims” for 2021. For now, however, 18 of the 24 life insurance companies operating in India in 2020-21 are reporting profits.

India launched the “world’s biggest” COVID vaccination drive in January 2021, primarily administering AstraZeneca’s vaccine (manufactured by India’s Serum Institute under the brand name Covishield) and Covaxin, an India-developed vaccine perceived as having garnered a “hasty” approval and which resulted in one acknowledged death during clinical trials.

And, to get 2022 off to an ambitious start, India just administered Covaxin to more than 3.8 million teenagers (ages 15-18) in the span of a single day. With 120 million youngsters between ages 15 and 19, India has the largest adolescent population in the world, which will remain the target of COVID vaccination efforts.

Meanwhile, with no long-term safety data and VAERS reports of COVID vaccine injuries passing the one million mark, including tens of thousands of adverse events reported for 5- to 17-year-olds, the U.S. Food and Drug Administration (FDA) just okayed Pfizer booster shots for American teens ages 12 and up.

Ethical doctors have been issuing urgent warnings about the dangers of COVID vaccines for children and adolescents for months — but the FDA’s and CDC’s paid stooges continue to ignore them.

Likewise, Substack writer and mathematician Mathew Crawford pondered the implications of Davison’s admissions, commenting, “I’m sure I’m one of many who wonder what kind of diamond mine of data the insurance companies are sitting on.”

Recent reports indicate U.S. life expectancy declined in 2020 by an unprecedented 1.8 years, and Davison’s remarks suggest we could see even worse when 2021 is tallied up.

At a 2017 symposium of actuaries, a presenter noted that understanding shifts in the structure of mortality requires going beyond variables such as life expectancy to look at the main drivers of the change and the age ranges affected.

In a study published a few months ago, researchers tackled that type of analysis, finding the dramatic decline in U.S. life expectancy was not only due to “direct” effects of COVID but also “indirect” effects (for example, from restrictive policies).

The researchers emphasized the 15 to 44 age group was most strongly impacted by indirect effects.

Clearly, numerous factors could be contributing to premature deaths in working-age adults — including suicide, overdoses and deferred care related to lockdowns.

However, the pressing question raised by life insurer Davison’s disclosures is whether insurance companies will reveal the extent to which the COVID injections are also having a fatal impact.