Scientist Whose Wife Was Injured by COVID Vaccine Tells FDA: ‘Please Do Not Give This to Kids’

Brian Dressen, Ph.D., who is a chemist with an extensive background in researching and assessing the degree of efficacy in new technologies, told the U.S. Food and Drug Administration Pfizer’s vaccine “failed any reasonable risk-benefit calculus in connection with children.” 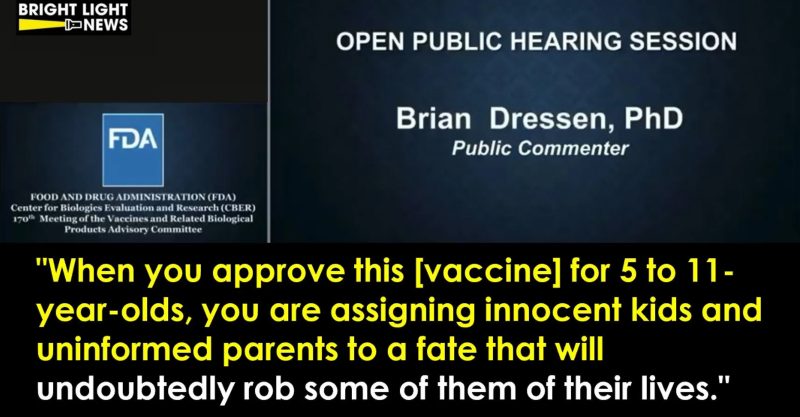 The U.S. Food and Drug Administration’s (FDA) advisory committee on Tuesday endorsed Pfizer’s COVID vaccine for children ages 5 to 11, despite strong objections raised during the meeting by multiple scientists and physicians.

Brian Dressen, Ph.D., is one of the scientists who testified during the 8-hour hearing.

Dressen is also the husband of Brianne Dressen, who developed a severe neurological injury during the Utah-based portion of the U.S. AstraZeneca COVID vaccine trial in 2020. After being injured by the first dose, Brianne withdrew from the trial.

During his 3-minute testimony, Dressen, a chemist with an extensive background in researching and assessing the degree of efficacy in new technologies, told the FDA advisory panel Pfizer’s vaccine “failed any reasonable risk-benefit calculus in connection with children.”

“Your decision is being rushed, based on incomplete data from underpowered trials, insufficient to predict rates of severe and long-lasting adverse reactions. I urge the committee to reject the EUA [Emergency Use Authorization] modification and direct Pfizer to perform trials that will decisively demonstrate that the benefits outweigh the risks for children. I understand firsthand the impact that you will or will not have with the decision you’re going to make today.”

Dressen told the FDA how his wife was severely injured last November by a single dose of a COVID vaccine administered during a clinical trial. He said:

“Because study protocol requires two doses, she was dropped from the trial, and her access to the study app deleted. Her reaction is not described in the recently released clinical trial report — 266 participants are described as having an adverse event leading to discontinuation, with 56 neurological reactions tallied.”

He said he and his wife have since met participants from other vaccination trials — including Pfizer’s trial for 12- to 15-year-olds — who suffered similar reactions and fate.

“Injured support groups are growing. Memberships number into at least the tens of thousands. We must do better. Those injured in a trial are a critical piece of vaccine safety data. They are being tossed aside and forgotten. The FDA has known first-hand about her case and thousands of others. The FDA has also stated that their own systems are not identifying this issue and that VAERS is not designed to identify any multi-symptom signals. The system is broken.”

Dressen said his family’s lives have changed forever. “The clinical trials are not appropriately evaluating the data,” he said. “The FDA, Centers for Disease Control and Prevention (CDC) and the drug companies continue to deflect the persistent and repeated cries for help and acknowledgment, leaving the injured as collateral damage.”

“Until we appropriately care for those already injured, acknowledge the full scope of injuries that are happening to adults, please do not give this to kids. You have a very clear responsibility to appropriately assess the risks and benefits to these vaccines. It is obvious that isn’t happening.

“The suffering of thousands continues to repeatedly fall on deaf ears at the FDA. Each of you hold a significant responsibility today and know that without a doubt, when you approve this for the 5-11-year old’s, you are signing innocent kids and uninformed parents to a fate that will undoubtedly rob some of them of their life.”

In an interview with 2News on Tuesday, Brianne said her kids will not receive a COVID-19 vaccine if approved. “I will react to the vaccine regardless of the brand, and so if my kids have this same genetic makeup, there is the high potential now that the same thing could happen to them,” she said.

Since his wife’s injury — diagnosed by doctors at the National Institutes of Health — the Dressens have met with other trial participants and families with children who also believe they were injured by the COVID vaccines. They formed a support group and website called, C19 Vax Reactions, to share their stories of vaccine injuries.

On June 26, Sen. Ron Johnson (R-Wis.) held a news conference to discuss adverse reactions related to the COVID vaccines — giving individuals, including Brianne, who have been “repeatedly ignored” by the medical community a platform to share their stories.

According to KUTV, the group continues to push the FDA and CDC for answers and help. Largely ignored, they reached out to Utah Senator Mike Lee, who wrote a letter to the CDC and FDA on their behalf.

Source: Scientist Whose Wife Was Injured by COVID Vaccine Tells FDA: ‘Please Do Not Give This to Kids’ • Children’s Health Defense

Source: Scientist Whose Wife Was Injured by COVID Vaccine Tells FDA: ‘Please Do Not Give This to Kids’ • Children’s Health Defense