One analyst predicted COVID boosters alone will bring in about $26 billion in global sales next year for Pfizer — who splits profits with BioNTech — and around $14 billion for Moderna if the shots are endorsed for nearly all Americans. 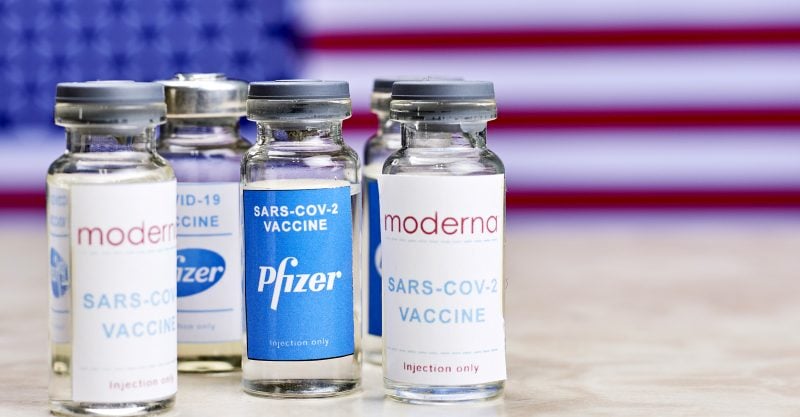 On Sept. 26, Pfizer CEO and Chairman Albert Bourla predicted life will return to normal within a year, but it’s likely annual COVID vaccinations will be necessary.

Bourla’s vision for a “return to normal life” would position Pfizer and Moderna to make billions in profits dispensing endless booster doses. How much the manufacturers stand to gain depends on how big the rollout is.

“Within a year I think we will be able to come back to normal life,” Bourla said in an interview on ABC’s “This Week.”

Bourla said he does not think this means variants will no longer exist, or that we “should be able to live our lives without having vaccinations.”

The “most likely scenario,” Bourla said, is annual vaccination with vaccines that last at least a year, “but we don’t know really, we need to wait and see the data.”

Bourla’s prediction echoed that of Moderna CEO Stéphane Bancel, who when asked last week for his estimate of a return to normal life, told Swiss newspaper Neue Zuercher Zeitung the COVID pandemic could be over in a year.

Moderna on Sept. 1 asked the U.S. Food and Drug Administration (FDA) to authorize the use of a third booster dose of its COVID vaccine.

Johnson & Johnson still has to submit the data for its booster shot to the FDA for approval, although the company has said it does not plan to profit from its vaccine during the pandemic.

According to the Associated Press (AP), the average forecast among analysts for Moderna’s 2022 revenue jumped 35% after President Biden laid out his booster plan in mid-August.

Most vaccines given so far in the U.S. have come from Pfizer and BioNTech. Morningstar analyst Karen Andersen expects boosters alone to bring in about $26 billion in global sales next year for Pfizer — who splits profits with BioNTech — and around $14 billion for Moderna if they are endorsed for nearly all Americans.

Pfizer executives said they expect their pre-tax adjusted profit margin from the vaccine to be in the “high 20s” as a percentage of revenue. That would translate to an estimated profit of $7 billion next year just from boosters, according to Anderon’s sales prediction.

This year alone, Pfizer expects its COVID vaccine to generate $33.5 billion in revenue with vaccine supply agreements worth more than $60 billion in sales, just in 2021 and 2022. The agreements include supply of the initial two doses of their vaccines as well as billions of dollars in potential boosters for wealthy nations.

Pfizer’s COVID vaccine is projected to make up 42% of the company’s total revenue, and will bring more than five times the $5.8 billion racked up last year by the world’s most lucrative vaccine — Pfizer’s Prevnar13 — a vaccine for pneumococcal disease.

This bodes well for future vaccine development, said Erik Gordon, a business professor at the University of Michigan. Vaccines normally are nowhere near as profitable as treatments, Gordon said. But the success of the COVID shots could draw more drugmakers and venture capitalists into the field.

For Pfizer and Moderna, boosters could be more profitable than original doses because they won’t come with the research and development costs the companies incurred to get the vaccines initially on the market, AP reported.

There is opportunity for Pfizer to generate similar — or higher — levels of revenue in the future as experts predict COVID is here to stay.

The FDA last week authorized a third dose of Pfizer’s vaccine for some individuals — those 65 and older and also those “whose frequent institutional or occupational exposure” to the virus puts them at high risk of serious complications from the disease caused by the virus, the agency said.

On Sept. 17, the FDA’s Vaccines and Related Biological Products Advisory Committee (VRBPAC), a group of scientists who advise the FDA on vaccine approvals, unanimously recommended Emergency Use Authorization for a booster dose of Pfizer’s vaccine for people 65 and older and those with compromised immune systems — but voted 16 – 2 against recommending boosters for the general population, citing a lack of long-term data. The committee said the risks did not outweigh the benefits for those people.

The decision was perceived as a major rebuke of the Biden administration, STAT reported. And it closely followed the resignations of Marion Gruber and Phil Krause, two key FDA vaccine regulators who announced their resignations days after Biden’s initial booster announcement.

Critics slammed the decision, calling it “unjustified and unethical” and a “consolation prize” for Pfizer, which wanted approval for everyone in the general population, over age 16.

Walensky also approved booster shots for older Americans over age 65, and adults with underlying medical conditions at least six months after their first series of shots — in line with the advisory panel.

“It is worrisome to me that anybody less than 30 is going to be getting a third dose without any clear evidence that that’s beneficial to them, and with more than theoretical evidence that it could be harmful to them,” said Dr. Paul Offit, director of the Vaccine Education Center at Children’s Hospital of Philadelphia and member of the CDC’s Advisory Committee on Immunization Practices (ACIP).

Offit also expressed concern that in overruling the ACIP, Walensky may have damaged efforts to persuade more unvaccinated adults to be vaccinated against COVID.

“It’s not hard to scare people who’ve already gotten two doses that they should get another dose,” Offit said. “I’m sure that you can get them to get 10 more doses.”