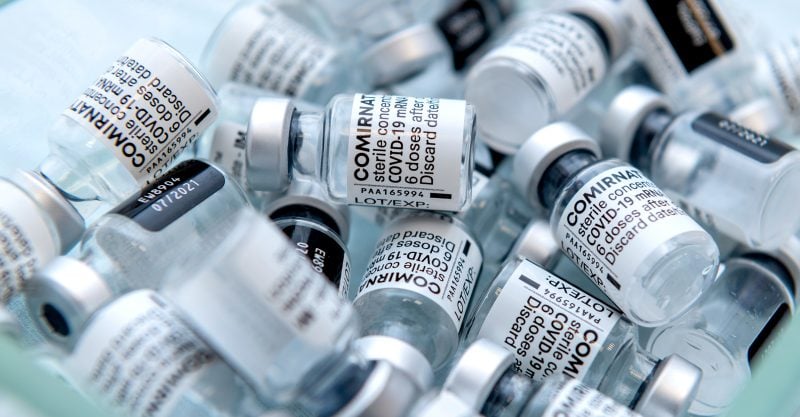 CHD argues that the licensure was a classic “bait and switch,” allowing Pfizer, the Biden administration, the U.S. military and employers to exhort people to take “licensed” vaccines when in fact the vaccines available and being administered continued to be the Pfizer-BioNTech Emergency Use Authorization (EUA) vaccines.

Here’s my latest with @NassMeryl… Buried in fine print of Monday’s approval by FDA of Pfizer Comirnaty COVID vaccine are 2 critical facts that affect whether vaccine can be mandated + whether Pfizer can be held liable for injuries.https://t.co/QtpHufCKDI

According to the lawsuit, the FDA violated federal law when it simultaneously licensed Pfizer’s “Comirnaty” vaccine and extended Pfizer’s EUA for its vaccine that has the “same formulation” and that “can be used interchangeably,” according to the FDA.

The law (21 U.S. Code § 360bbb-3-(3)) on “authorization for medical products for use in emergencies” requires the EUA designation be used only when “there is no adequate, approved and available alternative to the product for diagnosing, preventing or treating such disease or condition.”

The lawsuit alleges once the FDA approved and licensed Pfizer’s Comirnaty vaccine, there was no further basis for the FDA to preserve the EUA status for the Pfizer-BioNTech vaccine that Pfizer acknowledges has the “same formulation” and is “interchangeable.”

There also is no basis to retain EUA status for other COVID vaccines for the same use and for the same population as Pfizer’s Comirnaty vaccine, according to the complaint.

“The FDA must justify its actions in open court,” said Mary Holland, CHD president and general counsel. “The language of its licensure is nearly incomprehensible, and the result of licensed and unlicensed vaccines for the same indication is arbitrary.”

CHD is asking the court to vacate and remand the FDA’s decisions to license Pfizer’s Comirnaty vaccine and to extend EUA for the Pfizer-BioNTech vaccine.

Attorneys Robert F. Barnes and Derek Jordan of Barnes Law are the lead attorneys along with CHD Chairman and Chief Legal Counsel Robert F. Kennedy, Jr. and other counsel for CHD.

On May 16, CHD submitted a Citizen Petition to the FDA calling on the agency, to among other things, revoke all COVID vaccine EUAs and refrain from approving any future EUA, new drug applications or biologics license applications for any COVID vaccine for all demographic groups because the risks of serious adverse events or deaths outweigh the benefits, and because existing, approved drugs provide highly effective prophylaxis and treatment against COVID, mooting the EUAs. The petition garnered more than 30,000 public comments.

On Aug. 23, the same day the FDA licensed the Pfizer Comirnaty vaccine, the agency responded to CHD’s petition. This licensure and FDA response cleared the administrative path for CHD to file suit.