COVID-19: KMT calls for probe into death rate after inoculation

The Chinese Nationalist Party (KMT) caucus yesterday called on the government to investigate why Taiwan has a 0.000133 death rate after inoculations with the AstraZeneca COVID-19 vaccine.

KMT caucus secretary-general Cheng Li-wen (鄭麗文) said that the proportion of deaths after vaccination with the AstraZeneca shot is “horrifyingly high,” exceeding the rate in other nations. 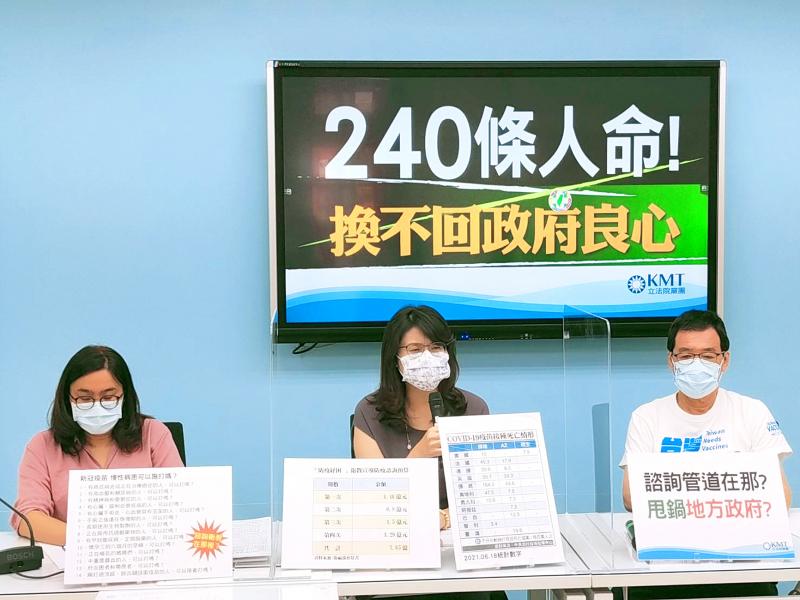 Chinese Nationalist Party (KMT) legislators attend an online news conference in Taipei yesterday, when they questioned the number of deaths among recipients of AstraZeneca COVID-19 vaccines donated by Japan.

Photo courtesy of the KMT

The Central Epidemic Command Center (CECC) should launch an investigation into the matter, instead of simply saying that those who died were mostly older people with chronic diseases, she said.

KMT caucus convener Alex Fai (費鴻泰) said that he did not mean to criticize or blame Japan, but there should be an investigation regarding death rates linked to a batch of AstraZeneca vaccines it donated, as well as an earlier batch manufactured in Italy and South Korea.

Some say that the ratio of deaths after the arrival of the AstraZeneca vaccines from Japan is similar to death rates among vaccinated older people in other nations, but this does not take into account that the deaths in Taiwan have occurred within a week of being inoculated, not over an entire year, Fai said.

His intent is not to criticize Japan, but rather to persuade the government to launch an official investigation into the post-inoculation death rates, as it is highly likely that COVID-19 would be seasonal, like influenza, Fai said.

The number of older people willing to get the jab has decreased as a result of the deaths, KMT caucus deputy secretary-general Jessica Chen (陳玉珍) said.

“People want to know what is going on” and the CECC should assuage their fear, Chen said.

The CECC on Tuedsay said preliminary results from autopsies conducted on 44 people who died after a COVID-19 jab indicate that most died from chronic diseases.

Thirty-three of the 44 autopsies showed that the main cause of death was pre-existing chronic conditions, the CECC said.

Another two died of pneumonia, two of cervical spine fractures, one of aspiration asphyxia, one of asphyxia after choking on food, one of intracranial hemorrhage, and two of urinary tract infections, said Centers for Disease Control Deputy Director-General Chuang Jen-hsiang (莊人祥), who is CECC spokesman.

The cause of death in two cases remains unknown, Chuang said.

Comments will be moderated. Keep comments relevant to the article. Remarks containing abusive and obscene language, personal attacks of any kind or promotion will be removed and the user banned. Final decision will be at the discretion of the Taipei Times.